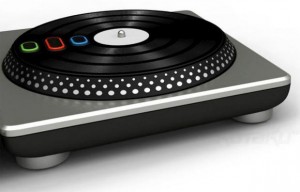 DJ’s generally have it slightly easier than bands.

Their gear is easier to break down, they don’t have to split their fee with 2, 3, 15 (if you’re in Dexy’s Midnight Runners) other people and ultimately most of the music they play has already been written and recorded by somebody else.

This easy run may explain Activision‘s decision to price their DJ Hero kit at Â£108!

The recommended retail price for the game is far more than the Â£70/Â£80 I was expecting for a typical Guitar Hero package – it’s almost at the same price point as the Â£135 you’d have to cough-up for the full Guitar Hero: World Tour bundle with drums, guitar and microphone.

Retailers are hopefully going to drop the price, (HMV have already knocked a whole nine quid off the pre-order price) – but, personally this isn’t enough when you see that the game can be picked up in the States for $120 (Â£73 at today’s rate)!