Dizzy Returning to Save Yolkfolk in the 21st Century! 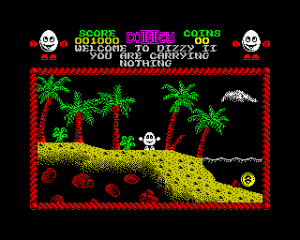 If you were gaming back in the mid-80s to early 90s you will be familiar with the hero Dizzy. If that name has brought a warm feeling of nostalgia then prepare to be really “eggcited”! 🙂

If you are unaware of the cult 80s game series then let me introduce you to the intelligent egg-like creature called Dizzy who would be tasked to save his friends and family – the Yolkfolk. The heroic Dizzy would be constantly taunted by his arch nemesis: the evil wizard Zaks.

Dizzy is the creation of Oliver twins, Philip and Andrew, and first hit the video game scene in 1986 for Commodore 64, Amstrad CPC, and ZX Spectrum… those very model names gives me the warm and fuzzies!

Thanks to some tweets it appears that Dizzy is on the verge of returning to the gaming world as Codemasters’ communications director Rich Eddy has been dropping a number of hints via the micro blogging site:

“In days of old, when games were sold, not on console but on tape, there was a Prince, not seen since, who wore boxing gloves – not a cape.” and “YES! Am proper eggcited”

All there is to go by, apart from those tweeted hints, is the new website which features a teaser video. Codemasters says that further details will be announced tomorrow.

Have a look at the video and stay tuned 🙂