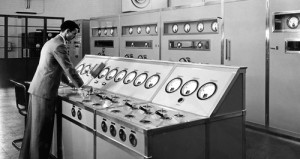 All you digital-dodgers bewarned!  Your days are numbered.  The big boys have stopped selling anologue goggle-boxes.

Curry’s have announced that they are only now stocking digital tellys.

Let’s face it;  they’ve been a dying breed for years now, partly due to the imminent switch over that’s taking place between now and 2012 and also thanks to our burgeoning obsession with monster screens and all things LCD or Plasma.

The out-of-town store people say they will continue to push integrated boobtubes, letting punters use an in-built freeview tuner to watch digital pics.

However, with slick HD ready tellies flying off the shelves, mostÂ buyers would rather have the fancier option of an LCD panel. Curry’s says that 90% of the TVs they shift are digital anyway.

DVD players with only analogue tuners are also getting the chop, so best start thinking about where you sit in the HD wars if you’re in the market for a disc spinner……buy dual format if you can – tis the safe bet 😉