Details ‘Surface’ About The Microsoft UX Tablet – Pictures and Video 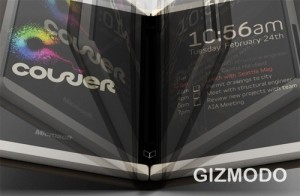 It was whispered about but check out this fire fuel!

It hasn’t been confirmed (or denied for that matter) but those know-it-alls over at Gizmodo claim that these leaked images and details of the Courier UX are genuine.

More tantalizingly they also state that the device has entered the latter stages of prototype development.

The pics and video (yeah – moving pictures exist for the Courier UX!) show a book-like system that uses two touchscreens, kinda like the EeeReader.

Both screens can be poked and stroked by finger or stylus and there’s even a 3-megapixel camera on the back.

It’s all very groovy but the thing that had me slightly confused is that apparently it isn’t a Windows 7 lump of tech.

Then all became clear – I was looking at it all wrong.

I should’ve been looking at the Micorsoft Courier UX as a small Surface device.

The OS indeed resembles the Surface operating system with the added bonus of mobile niceties such as maps and internetweb.

Enjoy the renders here and then nip over to Gizmodo to see more and the video demo.