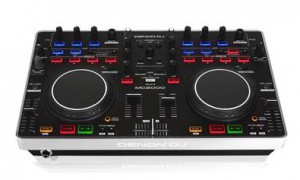 Yo! Yo! Yo! Let me see your handssssss…! Or something like that. I’ve been using a Denon DJ MC2000 for 4 days and this thing is addictive.

Denon invites owners of the MC2000 to “own the party” – so far, I think I can manage a short-term loan but this is the first time I’ve actually properly attempted anything approaching real DJing.

Being a musician, well a bassist, I have often jammed with DJs and at one point provided live bass to a drum and bass night but the twin decks, mixer and vinyl set-up always looked a bit daunting. In fact, I get a similar feeling when I sit behind a drum kit. The parts don’t look too complicated to use, but trying to get a meaningful noise out of them, that’s a whole new ballgame.

Thankfully a trusted name, Denon, has provided an entry level way to get in to mixing and matching from your digital library with the release of its Denon DJ MC2000 controller.

Denon build things to last. I’ve had Denon separates in my Hi-Fi and my PC rig goes through a trusty UD-M30 micro system so I knew what to expect in terms of build quality. The metal construction of the MC2000 feels sturdy and the only plastic on the case is the silver trim that runs around the outside of the unit. To me it looks and feels more expensive than it actually is.

The unit is compact, being no deeper than your average 13-inch laptop and is just a bit wider – so easy enough to drop in to a courier/record bag.

The Denon is a fairly standard-looking DJ device, but then there’s only so much you can do before it no longer resembles the classic turntables and mixer layout.

The MC2000 is an all-in-one system so you get the ‘decks’, mixer and a range of controls which I am just about getting to know what they all do.

Righty, down the middle we have a two-channel mixer, something that I can relate to after owning a variety of ‘portable studios’ over the years. Each of the channels has gain, hi, mid and low EQs, a line fader, and a cue button for headphones selection. The crossfader, which is used for switching between the two channels, feels fairly loose – I have it on good authority that this is a good thing if you intend to try your hand at scratching.

Between the two sets of EQs are the library browse controls, which let you look through your music – with the help of a stepped selector – and navigate files and folders, as well as load your chosen track to the deck channel of your choice.

Each deck has a pitch fader which has a central indent for the zero position, cue and play/pause buttons, a handy “sync” button (which makes beatmatching easier), a vinyl mode button for switching jogwheel scratch behaviour on and off, manual pitch bend buttons, and a key lock button (which keeps the original pitch of the track even if you have to speed it up/slow it down to match the beats) that also doubles up as a pitch range cycle button when used in conjunction with the central, white ‘shift’ button.

The decks, or jog wheels as the MC2000 is designed for digital, are really responsive and smooth and I found myself cueing up tracks fairly instinctively.

You can also program loops by pressing an ‘in’, then ‘out’, button. Even I got the hang of this within the first hour or so.

At the back, there are inputs for AUX-in and a microphone, you also get a master output, which sends the mixed audio to either a speaker system, or whatever you are using to record your latest creation on.

You’ll also find a USB socket, which is how the whole thing works with your PC or laptop if you’re taking this Denon DJ out on the road (or to your mates).

The headphone socket is on the front of the controller, which makes sense to me as that’s where you’ll be standing.

Setting up and getting going

This is all done in the time it takes to load up the bundled drivers and software. Really.

It is actually just a case of install the software. Plug in the MC2000 to computer via USB (which also powers the device). Plug the Denon DJ in to your system or some active speakers and shove a pair of headphones in and you’re (potentially) ready to own that party!

Once you’ve got the hardware in and the software running all you have to do is navigate to where you’ve got some music on your PC (it will play direct from iTunes and even keep your playlists). Load a track, and hit play and you’re off.

No audio output configuration. No set-up wizard. No mappings to load. Even a bass player can do it!

As you might imagine, with a system that requires a computer, there needs to be some software running the show – or party. Here, it’s Serato’s DJ Intro, which covers pretty much everything that’s needed for mixing your tracks.

With Serato, you get two screens: one view when you launch the software, and another for when the unit is plugged in.

The offline screen lets you set cue points and analyse your collection so the software gets a chance to do its BPM homework so that when you plug your controller in, you’re ready to go.

When the controller is plugged in the screen is taken up mostly by your track listing with the playlists on the left-hand side. Up at the top you get two small decks and two full-width waveform windows.

Select a tune and load it to a deck by using the ‘Sel.’ knob (I’ve been scrolling and selecting using a mouse just because that’s what I’m used to but there are those buttons I mentioned earlier) and ‘Load’ button for the chosen deck. The waveform then populates its chosen window. The display on Serato’s software is clear and the waves are colour-coded by frequency which also goes towards making things easier.

As well as the main waveforms there are two helper waveforms which are smaller and in the centre of the screen; one which shows you the peaks of both tracks running mirrored alongside each other, and the other shows you similar peaks but stationary. The former is good for quick BPM sense checking in a mix, the latter as a guide to getting the initial BPM there or thereabouts when manually beat matching. These are extremely useful once you’ve worked out what they’re there for. Apparently this is something that only Serato does.

If you need more features than what is available on Serato Intro you can upgrade to Serato DJ for around £150. Personally, I think there’s more than enough for me to get my head around for the foreseeable future in Intro.

The jogwheels are mightily impressive. Granted, I’ve never DJ’d using vinyl so using these two small discs to cue tracks and indulge in a little wickety-wickety-wah-wah did the trick. Most importantly they work excellently with the software.

I was also impressed by the accuracy of the pitch faders, and the cue and play/pause buttons are nicely backlit red and green respectively which will make using them in a club or darkened bedroom a cinch. Selecting them is responded by a good, secure “click”.

I’ve been testing the Denon DJ MC2000 using my AKG K 450 headphones and output to them is plenty loud enough. Likewise, I found the output level from the RCAs in to my system to also be good enough to take out to a decent hall. Keeping in mind that the MC2000 is powered by your computer with no option to add an external power supply, Denon has come up trumps I reckon.

As well as being loud enough, the controller is also silent when you kill the EQs and gain.

This being a novelty to me at the moment I have spent too much time playing with the effects, which can be found at the top row of dials. These effects are a hi-pass filter, lo-pass filter, and flanger.

You also get manual and auto looping functions. The manual loop in/out points can be adjusted by holding the respective button and turning the jogwheel – the waveform display freezes to help you with this. The ‘auto’ button starts an instant loop at the current set number of beats, which can be halves or doubled using the ‘-‘ and ‘+’ buttons. 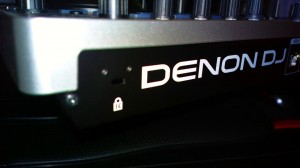 For me this is an incredibly well put together piece of kit.

The Denon DJ MC2000 is also impressive as it’s powered by USB and yet the LEDS are nice and bright and the sound quality is excellent.

The fact that it’s really simple to set up and, as a total beginner, I didn’t have to trawl through pages of ‘how tos’ and tutorials on mapping and audio configuration was a total bonus.

The turntables/jogwheels are fun to use but, more importantly, are really accurate and, looking at the video below, good enough to scratch with.

The sliders are smooth and everything feels well bolted together. Talking about being bolted together, the MC2000 also has a Kensington security slot round the back so you can chain it to your DJ booth.

If you had sat me down with a pair of Technics turntables and a two-channel mixer I can guarantee you that I would have spent ages looking at the set up and my vinyl before actually giving it a spin – but the Denon DJ MC2000 not only makes the whole thing look more inviting, it has got me hooked.

If you’re looking to make the move from vinyl to digital DJing, looking for a portable controller or wanting to get started with some decent gear, I can heartily recommend the Denon DJ MC2000 which has a SRP of £269.99