Dennis Ritchie, Creator of UNIX and C Dies – Another Huge Loss to Tech 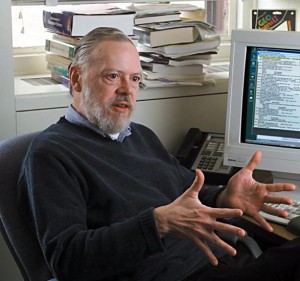 As fans of fashionable and fantastically intuitive tech are still getting over the loss of Apple supremo, Steve Jobs, another great loss to geekdom has been reported – Dennis Ritchie, who, it could be argued, created the stage on which Jobs performed.

The first news of Mr Ritchie’s death came via Rob Pike, a former colleague who worked with him at Bell Labs. Mr Ritchie’s passing was then confirmed in a statement from Alcatel Lucent which now owns Bell Labs.

He was 70 years old and had been suffering from an illness for some time.

The C programming language proved its worth during the 70s when computer hardware design still hadn’t found its feet. This made programming for the weird and wonderful variety of machines pretty specialist. Ritchie designed C to be portable so that anything written in C, as long as the programmers followed the rules, could run on almost any computer with little or no modification.

Thompson and Ritchie then went on to write UNIX in C which followed the same premise of portability. All of this meant that programmers could, in essence, learn one language, one operating system and pretty much be able to use that knowledge everywhere.

The knock-on-effect of this was that if a hardware manufacturer slapped C on their machine it opened itself up to a wide pool of existing software and talent. This was also the reason why UNIX suddenly became the playground for experimental, as well as practical, networking between systems.

Ritchie seemed to be modest and generally the first to at his creations even while recognising their special place in computing. He said that “C is quirky, flawed, and an enormous success.” And when talking about UNIX said that “It is very simple, it just needs a genius to understand its simplicity.”

In 1999, Mr Ritchie’s influence and accomplishments won official notice when he was awarded the US National Medal of Technology – the highest honour America can bestow on a technologist.

I am sure that his passing will be felt amongst all those that programme.