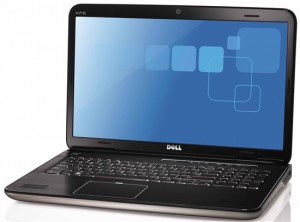 So as not to be outdone by Apple and it’s new MacBook Pro announcement – Dell has flashed its high performance XPS 17 and XPS 15 laptops in a release announcement.

Like the new Apple lappy’s the XPS 15 and 17 are loading with the “latest second generation intel Core processors” better known as Sandy Bridge.

You can opt for i3, i5 or i7 dual core and quad-core flavours and in the graphics department the XPS 15 is available with GT 540M mobile graphics with 2GB RAM and XPS 17 Nvidia 555 with 3GB.

The Dell XPS 17 has the bonus of 3D smarts should that be your thing. It’s loaded with a 1920 x 1080 3D compatible screen but you’ll need NVision 3D glasses to see anything extra dimensional – alternatively you can sling the pic to your 3D TV using Nvidia 3DTV Play.

As you’d expect from these media-savvy laptops both XPS’ are equipped with a Skype HD certified webcam, JBL speakers and Waves Maxx audio and USB 3.0. They are also loaded with Dell Stage software which is designed to give you easy access to all your music, photos and videos.

Dell underlines that: “All configurations of the new XPS 15 and 17 laptops all feature updated hardware from Intel that is not affected by the chipset issue.”

The new XPS 17 is available now in North America, Latin America and Europe. The XPS 15 is available in the United States, and will be rolled out in additional countries in the coming weeks.

Apple or Dell then?