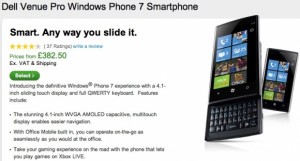 Way back when Windows Phone 7 was launched the rather spiffing Dell Venue Pro was pencilled in to land before crimbo.

It was delayed and then ear-marked for a release earlier this month – yup, that came and went too.

It’s practically March but better late than never – Dell has now officially launched the Venue Pro in the UK!

The Venue Pro apparently was dogged by a firmware issue and has unfortunately had to hand over its ‘first WinPho 7 handset with a QWERTY board’ to the HTC 7 Pro which launched a week or so ago.

The HTC phone is kitted out with a landscape keyboard but the new Dell model drops its keyboard in a portrait stylee which is a more comfortable proposition for Microsofts operating system by all accounts.

As well as using the much praised Windows Phone 7 OS and sporting that drop down board the Venue Pro features a 1GHz processor, 5-megapixel camera with LED flash and 16GB of internal storage inside which is all topped off by 4.1-inch WVGA AMOLED touchscreen display.

I still reckon it’s quite a looker and would love to get my hands on one!

Order from Dell now and get it in 10 days.