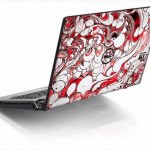 Dell is pandering to those funky urbanites out there with their Special Art Edition designs for its Studio 15 and Studio 17 laptops.

Dell has teamed up withÂ artist Mike MingÂ and producedÂ five designs aiming to bring new life into the boardroom or your home.