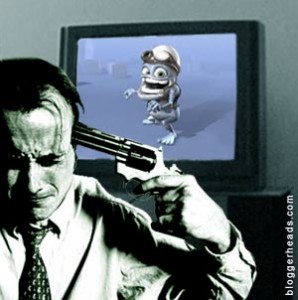 I have to admit to being interested in marketing and all those little ways that companies get you to buy more stuff. One area that seems to be suffering more than others is the music industry and watching it attempt to move with the times can be slightly amusing.

Major artists on posters, adverts on the telly and at the cinema are some of the more blatant ways that the industry is trying to claw-back favour with the punters but they have tried other ways.

Just ponder for a second and think about what the most common sounds that you hear are; surely the sound your phone makes when waiting for the person you have called to answer must be up there in the top 5. That’s what is called the standard ring back tone.

Some business have started to turn this “dead” air time to callers waiting for an answer into a new and commercially attractive medium. By using this method the business could earn from monthly subscription fees, content purchases, advertising, etc.

After the mobile ring tone bubble burst the industry decided to turn to ringback tones as well.

“Ringback tone revenues are now a steady, reliable stream,” RCA Records director of mobile marketing Sean Rosenberg says. The label was the first to boast of gold-level ringback sales with the single “No One” by Alicia Keys, which surpassed 500,000 in sales in the United States alone.

In March 31, 2009 Broadcast Music, Inc. (BMI), the world’s leading music performing rights organisation, published its market revenue projections for 2009 and finalised its earlier figures for 2008. BMI licenses the public performing right in the U.S. for the musical works of more than 375,000 songwriters, composers and music publishers. BMI projected that ringback tones would surpass $235 million in U.S. retail sales during 2009, up 15% from BMI’s 2008 market estimate of $205 million and 68% from BMI’s 2007 estimate of $140 million.

At the end of 2010 a report from media and communications analyst SNL Kagan estimated the ringback-tone revenues for 2009 and 2010 at $165.7 million and $185.8 million, respectively. A little bit different to the earlier estimates aren’t they?

The Kagan report, released on October 18 2010, also pointed out that the habits of mobile phone users were changing yet again: “driven by the increase in handheld data devices, enhanced content offerings and improved wireless infrastructure,” that “ringtones and ringback tones are struggling while full-track sales and radio royalties are growing indicates a general shift in how Americans are using their phones: from personalisation to portable media player.”

When was the last time that you downloaded a ‘ringtone’ or even a ‘ring back tone’?

As a musician, well, bassist, I am happier that people are now going to streaming services to listen or even buy a full track instead of paying for a 15 second clip. Will we ever get back to the point of people enjoying the pleasure of listening to a full 12 track release though?