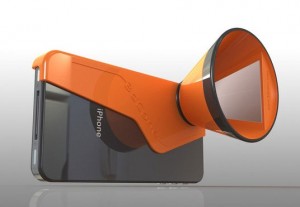 Fancy taking 3D images using your current iPhone? Well, the new 3DCone attachment promises to do just that – and you can help make it happen.

After Ouya’s extremely successful Kickstarter campaign, a project to enable 3D Stereoscopic photographs to be taken with an iPhone is now looking for backers.

The 3DCone is an adapter for your iPhone 4/4S which, once fitted, allows you to capture 3D videos and stills.

The design of the 3DCone transforms your iPhone into a stereoscopic camera through some clever mirror positioning. This equips the iPhone with the ability to take two pictures with slightly different angles which are used to create the 3D image.

An accompanying application then processes the images or movies after they have been taken.

The 3DCone project can be found over on the Kickstarter website and they’re looking to raise enough pledges to make the jump from concept to production.

Pledges now start at $39 or more and plans are for the 3DCone to hit the market in March next year.