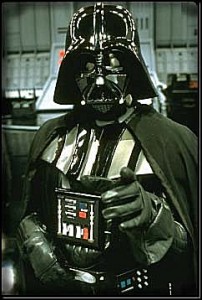 As it’s Star Wars Day today (May the Fourth….) I thought I’d bring you some Star Wars related news.

Popular GPS folk, TomTom, has recruited everyone’s favourite Sith Lord to provide his dark side vocals to their voice navigation with C-3PO and Yoda joining the line up in June and Han Solo arriving in August.

Download the Darth Vader navigation pack for your TomTom and Luke’s dad will provide breathy directions as well as there being a little Lord Vader map icon.

The TomTom Darth Vader voice commands inspired by lines from the original films with Vader instructing you to: â€œBear left, to the Dark Sideâ€¦â€ You really need to see Darth in the recording studio video below 😉

As well as DVâ€™s voice, the TomTom download includes music and sound-effects from the films including the woosh of light sabres, the sound of TIE fighters and John Williamsâ€™ Imperial March.

The TomTom Darth Vader voice pack is available to download now for Â£7.95.