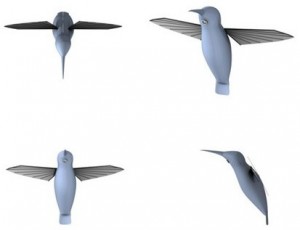 You’ve got to hand it to DARPA – The brains working on tech for the Pentagon have some far-out ideas including this robotic hummingbird-based drone.

Could little hummingbird spies be helping in futuristic espionage? Not just yet…

Program manager Todd Hylton is aiming for “an approximately 10-gram aircraft that can hover for extended periods, can fly at forward speeds up to 10 meters per second, can withstand 2.5-meter-per-second wind gusts.”

At the mo the little robobird can only fly for about 20 seconds at a time.

But, knowing the speed that technology, brains and Government spending goes there could soon be those robotic hummingbirds sneaking into people’s homes and offices.

My birdwatching to me to Wired where I found this 🙂

Check out the vid of the drone below going through its tests.