We Dare Not – Ubisoft We Dare Game too Sexy for UK 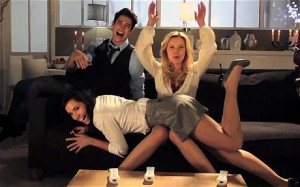 If you were looking forward to some light S&M after dinner the you’ll be disappointed to read that the Nintendo Wii and Sony PS3 title by Ubisoft, We Dare, will not be coming to the UK.

The game was slipped out in January but thanks to its rather sassy vid trailer soon got around the interwebs!

If you recall We Dare is pitched as putting players in compromising situations – the trailer for the game featured two couples swapping partners and facing awkward gameplay scenarios when following on-screen instructions – yes there was a bit of spanking, suggested lesbianism and male stripping.

The PEGI 12 rated game also got the wrong media attention as the “naughty” but “hilarious, light-hearted” and playful content was deemed too adult for the rating.

Ubisoft says that the decision not to bring We Dare to the UK was:

“following the public reaction to the 12+ rating of We Dare”.

The Sun, you know the ‘newspaper’ with boobs and small mindedness, was shocked by the content as was The Telegraph who proudly ran their victory piece today.

The ratings body PEGI (Pan European Game information), its governing organisation ISFE, and the VSC – which implements PEGI in the UK – had all come out in defence of the game’s rating. Ubisoft had even added a ‘parental guidance’ label to the box art to make it clear the game isn’t suited for all audiences.

The game will still be released elsewhere in Europe.

Do you agree that the game is too naughty for PEGI 12 rating even with the PG sticker?