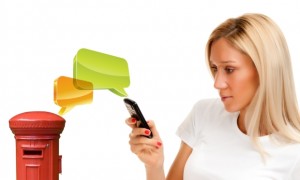 Every now and then you need to physically post something. Can you ever find a stamp when you need it? Nope, neither can I – not even in my man drawer.

Those clever Scandinavian types have turned to mobile phones to lick the system into shape.

Post Denmark and Posten AB of Denmark and Sweden respectively are moving to getting your stamp via text.

When in Denmark you’ll get your letter, card or parcel (up to 50g) all ready to go and then text ‘porto’ to the number 1900. In a matter of moments you will be given a unique code that you write where you would previously have stuck a stamp. Then shove it in a postbox as normal.

Postage costs 8 Danish kroner (92p), the same as a first-class stamp. At launch, you’ll need a subscription with a phone network, but pre-paid accounts should follow.

Germany has had a similar system for a couple of years, but the text-message codes are more expensive than normal stamps.

Granted, letters have been replaced with emails and texts and birthday cards with a quick message on someone’s Facebook Wall. Receiving Postal Orders or Vouchers have been replaced by PayPal, iTunes credit or Amazon Vouchers – but you’ll always need the post for packages and parcels until they’ve sorted replicators and teleport machines.

When was the last time you stuck a stamp on it? Let me know below 🙂