Daleks in Your Living Room Controlled by Your TV 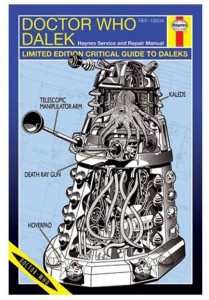 Daleks are one of the things that forced me to hide behind the sofa, along with Cybermen and, more recently, those stone angels weirded me out too. Soon the sofa wont be able to save me and other like-minded Who fans as the Dalek might well be behind there waiting!

Aunty Beeb has plans to create Daleks that magically spring to life every time Doctor Who is on TV!

You may be glad/disappointed to hear that there’s only a 30cm (1ft) prototype scuttling around at the moment but this idea could pave the way for other characters to be transferred from screen to floor.

“Effectively, this puts another actor in the living room, enabling a production team to write a script and include it as part of the viewer’s experience” so says project director Adrian Woolard who goes on to say “It’s a playful illustration that shows the possibilities that exist to producers when we start to think about future connectivity in a home environment”.

Creator Andrey Bonney programmed the Daleks via a system, dubbed ‘Universal Control’ which works by transmitting code to the Wi-Fi enabled overly-aggresive pepper-pots to tell them to mimic the onscreen actions of their once stair-shy counterparts in real time. The trial involved the BBC technologist recording the movements of the Daleks on an episode of Doctor Who and embedding the code into the clip from the show. Bonney’s top tech tweaking allowed the clip to trigger and transmit the movement codes to the prototype Daleklet. The hope is that this can be simulcast with the live broadcast of episodes and embedded on the DVD and Blu-ray releases.

I’m guessing that we’re a while off seeing a full-sized Skaran refugee taunting your pets and scaring young children in the warmth of your livingroom but the smaller version will certainly be enough to bemuse your cat for a while and may surprise any guests when the immortal word “EXTERMINATE!” is shouted from under the coffee table.

The part tank, part plumbers are the longest-running and best known villain in Doctor Who, which celebrated its 48th birthday on Wednesday. Those unfamiliar with the Dalek may be surprised to find that hidden within those metal cases are genetically engineered Kaled mutants created by the scientist Davros during the final years of a thousand-year war against the Thals.

Current Doctor Who chief, Steven Moffat, is not keen to bring the Daleks back which is the opposite of his predecessor Russell T Davies who seemed to love them. Perhaps the interactive solo tanks would remain still for a while if that’s the case but, in the latest series, which ended in early October, the episode showed a broken-down Dalek lying still on its side…