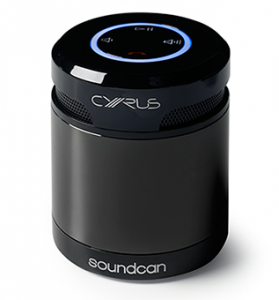 I am not usually one who is swayed by brand-names. If it does what it says well and is at least worth the money then all is good. There are those that stand out, obviously – Aston Martin, Rado, Ampeg, Marshall, Fender, you get the idea. Cyrus happens to be one of those Hi-Fi brands that I’ve lusted over. So, when they announced their Soundcan Bluetooth speaker I thought this would be a great chance to at least own some Cyrus gear.

The problem with making a name in your field is that there is already a great amount of expectation from what the punter is going to get from your product. An issue that I am sure Aston Martin had when they decided to re-badge a Toyota iQ and release it as the Cygnet.

So, is the Cyrus Soundcan a brave move for a known, quality brand or simply an attempt to get in on a market that it doesn’t really need to?

The name Soundcan is pretty apt and it does look like a decent bit of kit. The Soundcan’s polished exterior lends itself to being something above the plastic-covered speakers already on the shelves and it has a very reassuring weight to it (227g).

There’s no screen to suck the rechargeable battery’s juice, instead there is a four-button control disc on top of the device.

All-in-all, the Soundcan presents itself admirably and the compact can is winning me over already.

The whole point in having a wireless speaker is that the pairing of devices is simple, hassle-free and fast.

Thankfully, with the Cyrus Soundcan, it was. Just switch it on at the base and then hold the play button. The Soundcan appeared on my HTC One’s device list and it was sorted.

I must point out that switching the device on and hooking it up could be a ‘Marmite moment’ though. When the can powers up you get a B-movie hyperspeed style sound effect before the helpful female voice instructs you how to connect via Bluetooth. Once the devices have been paired you get a little happy jingle. Break the connection, however, and the Soundcan assistant gives out a plaintive “Awwwwww…”.

The Soundcan also has the option for a wire connection should your sound source not be equipped with Bluetooth.

The Soundcan can definitely kick out the jams at a good volume. I would say that most standard-sized rooms would be filled by this diminutive device.

To Cyrus’s own admission “it’s not possible to reproduce the high fidelity sound quality of a Hi-Fi system in a speaker 7 x 6cm in size” and placement has a lot to do with the frequencies managed by speakers of this size. Put it by you on a picnic blanket and then on top of a wooden table and you could almost be listening to entirely different devices.

Cyrus advices to place it “in the centre of a wooden table” for the best sound. The Soundcan has impressive responsiveness in the mid-range and the treble cuts through. I was disappointed by the hollowness of the bass end though. I hoped for so much from a speaker in this price range.

I wondered if I was being to harsh and expected too much from this Soundcan. It is, after all, a little Bluetooth speaker and should not be expected to replace Hi-Fi sound. To this end I broke out the BoomBotix Boombot 2+ and the Music Angel Friendz – ok, so the latter isn’t Bluetooth but it is pocketable, portable and can be daisy-chained if your friends are packing Friendz.

The Cyrus is the most expensive with the Music Angel at the other end of the scale and the Boombot sitting in the middle – also, the Boombot is around half the price of the Soundcan.

The Music Angel is still capable of filling a space with sound but the reproduction is a little on the hollow side and, as mentioned, it isn’t Bluetooth. The Boombot 2+ amazed me in this comparison test – it’s still not Hi-Fi quality but does justice to bass, mid and treble equally and is a little more protected than the Soundcan. 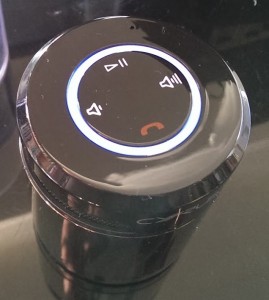 Although the Soundcan is clearly not the speaker of choice for a committed audiophile, the option to use it as a speakerphone will make it a popular choice with hotel-hoppers. The microphone, which is embedded in the top rim, does a good job of capturing clear conversation, and given the Soundcan’s penchant for the mid-range Skype calls are excellently clear.

Four hours’ worth of charging via micro USB will indeed get you the claimed ten hours of battery life, and possibly more using a wired connection.

The Soundcan is well-built and a good looking bit of kit. It performs respectively and I am sure that many will be taken by its compact, practical design.

Battery life is impressive as are its speakerphone skills.

Unfortunately, at £80, I find it hard to ignore its lightweight bass response when a skull-shaped speaker at half its price, to my ears, would win me over more than the Cyrus.

I must say that this might be more down to personal taste than actually being a major issue. This is the first device of this sort from Cyrus and it does what it does competently enough.

I am sure that those loyal to the brand may have something to say about this.