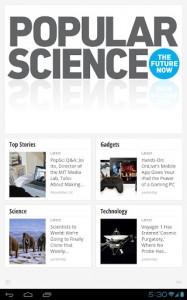 Google Currents, the very lovely magazine-style reader app, will now be sprinkled into the bundled package that comes with Android Jelly Bean.

The slick magazine reader app, Google Currents, will join the likes of Gmail, YouTube, Talk and Maps in Android 4.1.

Google must be very pleased with it to hand Currents such an acolade. Well done Currents!

If you’re not familiar with Currents, it squirts articles from the likes of Forbes, The Guardian, TechCrunch, etc into a FlipBoard style reader.

Currents will come preinstalled on devices shipping with Jelly Bean, the Nexus 7 for instance, as well as becoming part of the over-the-air update that’ll reach the Galaxy Nexus, Galaxy S II, and Motorola Xoom next month.

Google sent an email to content partners alerting them to their plan, making it known that more people will be using Currents. This was a nudge to get them to optimise their content for the service.

Face Unlock has also been given an overhaul. The feature lets you unlock your phone just by looking at it: great, until it was revealed it could be fooled by a photo of your face.

To solve that little hiccup Google has added a “Liveness Check” that means you have to blink before it’ll let you get access to your phone.

So, now if you match the facial profile, and you can prove that you’re alive, you can make that call 🙂

It’s similar to Samsung’s “Blink Unlock” feature. Face Unlock needed some bolstering, though in Google’s defence, it always said it was experimental, and more of a novelty than a belt and braces