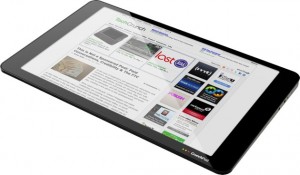 The Twitterverse tweeted the ‘breaking news’, a Youtube video of the CrunchPad prototype unboxing has been spotted and all kinds of folk got excited – including Gizmodo.

Loic Le Meur, the Seesmic.com founder who has close ties with Michael Arrington, posted the video of what appeared to be the earlier prototype which came in red plastic shown back in April.

There are no logos shown on it which are found on the new launch prototype released two weeks ago but, as some other eagle-eyed CrunchPad watchers have pointed out, it did have a Bing.com sticker on the back, and TechCrunch recently received a bunch of them.

People had deduced that this suggested that video was shot recently.

Giz did say that the unboxing wasn’t a true unboxing because of the fingerprints.

The YouTube clip has been since removed and I’m guessing the reason for this may very well be the confusion which surrounded the blogosphere.

This is what launch prototype will really look like.