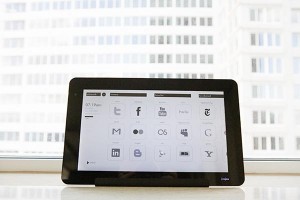 There’s been a lot of “it’s on” and then “it’s off” articles regarding the fate of the fabled Crunchpad.

Unlike a lot of my fellow bloggers, I have resisted in reporting on every twisty-turny-onny-offy rumour about Michael Arringtonâ€™s much-hyped internet tablet.

But, as this talked-about tablet has just been unveiled at a press conference by developers Fusion Garage I thoughy it was time to join in the fray.

The CrunchPad is now named JooJoo and will go on sale for $400 this Friday, December 11.

Fusion Garageâ€™s CEO, Chandra Rathakrishnan, says that the Joojoo is not a tablet PC – Huh?

The reason for that is that, yes, it does have a tablet form factor but it boots straight into the internet browser and will not run apps.

Joojoo will only come in black with a 12.1 inch capacitive touchscreen.

It will be packing a 4GB solid-state drive and local cache which means that Joojoo will be able to remember your stuff, you know, like user names and passwords.

You’ll notice that upon its sleek body there is just one button, for power. There does seem to be an SD card slot and a USB socket though.

Of course, the Joojoo is fitted with an accelerometer so it will be able to rotate its screen and perhaps even handle a little gaming.

Fusion Garage also says it will have enough graphics power to deliver HD video as well as delivering up to 5 hours of battery life per charge.

Joojoo wonâ€™t have 3G though as there’s nowhere to shove a SIM (boooo!) so it will have to rely on WiFi.

Fusion Garage will be demoing Joojoo this week and says it has resources to meet â€œsignificant demandâ€ with $3m dollars in funding already and another round of investment just completed. It denies deals were completed with Mike Arrington or Techcrunch.

Asked if Techcrunch had even contributed to the deviceâ€™s marketing, Rathakrishnan was dismissive: â€œIt depends what you define as marketing. Michael has helped us talk about what the tablet can do but so have many others. We can take this to market without Techcrunchâ€¦Techcrunch is just a blog.â€

Hmmmmmmmm……….. I wonder what a certain Mr Arrington has to say to that 😉