CRISTAL – The largest Universal Remote Could Replace Your Coffee Table 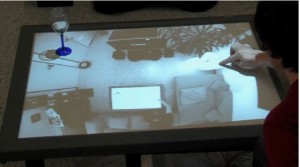 Your Universal Remote may be useful but it’s not as big, funky or sociable as this: The CRISTAL

CRISTAL is a research project that moves the uni-mote to a Microsoft Surface-type table with incredibly intuitive gestures.

Feel like watching a film?  Just drag the DVD cover to your TV!  Simples!  🙂

You could even track a path for your Roomba if you so desired.

CRISTAL actually stands for “Control of Remotely Interfaced Systems using Touch-based Actions in Living spaces”  and the system uses a camera to take an overhead shot of your living room setup so that you can designate the compatible parts: TV, speakers, digital photo frame, HTPC, Roomba, etc.

After that you’ll be able to simply touch, swipe, drag and drop in order to control the room.

Your digital media collection appears as a Cover Flow style menu which can be dragged either to the speakers or TV (audio or visiual – told you it was intuitve), or just examined more closely on the Surface-type screen itself.

Yup – that means you can preview a film right on the table – if you decide that you wanna watch it just flick it to the tele.

â€œWe wanted a social aspect to activities such as choosing what to watch on TV and we wanted to make the process easy and intuitive,â€ says Stacey Scott, assistant professor at the University of Waterloo in Ontario, Canada, and a member of the project. A demo of CRISTAL was shown at the Siggraph graphics conference earlier this month.

Universal remotes have become popular in the last few years, but they are still difficult to use. Their greatest flaw, though, may be that they do not help quash those battles over who gets the remote.

CRISTAL solves those problems, says Christian MÃ¼ller-Tomfelde, an Australian researcher who is currently writing a book on research in tabletop displays.

â€œIt is a clever use of the tabletop as a â€˜world-in-miniatureâ€™ interface to control room elements,â€ he says.

From that pricing I’m taking it that they’re not using an actual Surface as it costs about that much alone.

It still wont be cheap as a remote controller but have you tried resting a coffee on a remote lately?

Watch it in action below: