CrackBooks – Apple Accepts MacBooks are Cracking Up and Offer Replacement 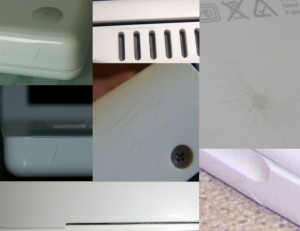 The MacBook case cracking issue that a number of people have been experiencing with their 13 inch white MacBooks is real and Apple is willing to replace your MacBook if it happens to you – and that’s according to the latest noble Apple service bulletin.

You will no doubt remember the iPhone cracking problem that was eventually accepted as reality – what’s going on Apple?

Apple added, however, that other portions of the case could be affected by the cracking issue. For all instances, providers were reportedly asked to inspect the MacBook carefully to determine whether the cracks could be the result of the notebook haven been dropped or other accidental damage caused by the owner.

In the event that providers are unable to identify signs that the user is at fault for the cracks, theyâ€™re advise to escalate the notebook for coverage by Apple, regardless of whether its 1-year limited warranty has expired.

Don’t try taking your MacBook back because you dropped it in the bath or reversed over it.

Have you got cracks?

errrrrrrrrrrr……………..you know what I mean!