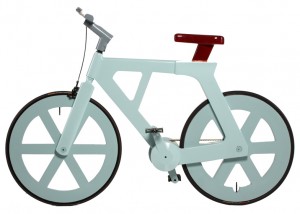 A cardboard bicycle. Yup, that’s what it says. Just when you thought that cycling couldn’t get any more eco friendly, engineer and inventor, Izhar Grafni, creates one made from cardboard. Is this re-cycling?

Grafni’s journey to create a cardboard bike was triggered by a conversation when shopping for cycle parts where a cardboard canoe was mentioned.

Most people would have just returned home, fitted the new parts to their bike and then gone for a ride. Not Mr Grafni. Instead he was set on trying to build his cardcycle.

His invention is made durable by folding over sheets of cardboard to more than double their strength while, thankfully, it is coated in a waterproof resin so you don’t return from your ride carrying a courier bag full of mush.

The only parts of the bike that aren’t made out of cardboard are the brakes and chain – even the wheel base and seat are crafted from the recyclable material.

Grafni says: “Since there was no know-how with regards to the cardboard material, the first two years were devoted to learning the properties and behaviour of the material.

“The idea is like Japanese origami. You fold it once and then it doesn’t become twice the strength, it’s almost three times the strength. So I took it from there and did the same thing with cardboard.

“It looked like a packing case on wheels. Not a bicycle. Like Henry Ford who made the car available to anybody, this bike is going to be cheap and available to any child in the world, including children in Africa who walk dozens of miles to school every day.”

Hopefully, this year will see the bike put into full-time development after it received financial backing at the end of 2012 from a company called ERB. His dream is that the bike becomes a means of cheap transportation in the developing world.

A spokesman from the backing company states: “Cardboard Technologies is all about making a better world for us to live in by two main principals: creating the ability to produce almost any daily product from at least 95 per cent recycled materials and building auto production lines, with a simple post-production assembly that will be performed by people with difficulties or disabilities”.

Grafni claims that the bike can withstand water and humidity, as well as being stronger than carbon fibre. The bike is able to carry riders weighing up to 220 kilograms and, here’s the best bit, only costs around £10 to produce.

Check out the video below for the full story of the