Commute on a BOXX – The Suitcase Shaped Electric Bike 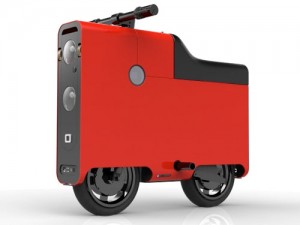 If you’re looking for an easy way to get from A-B then a mini electric bike could serve your needs. Here’s the latest – the aptly named BOXX electric bike.

You may know that I’ve enthused about such cool transport as the OZO Easy Glider, the YikeBike and even the Sinclair X-1.

If you’re one of those people that used to play with the packaging as well as the toy inside, then this BOXX might float your boat.

The BOXX electric bike is 1 metre long and weighs 55kg – so, unlike the Yike, you wont be hopping on and off the tube or train with this under your arm.

It’s equipped with traction control, anti-lock brakes and LED lights so no shortage of tech here.

The BOXX does sprint along at 35mph with a top range of 40 miles, so that should sort most quick trips.

There’s a range of colours and other options to play with so that you can make your BOXX your own.

The entry level BOXX will set you back US$4,000 but you can get another 40 miles range if you fork out an additional 600 bucks.