Colgate ProClinical toothbrush marketing stunt gets the brush off 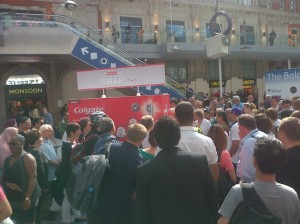 I, for one, was and still am impressed by Colgate ProClinical A1500 electric toothbrush and, I’m guessing, many have read my review as hundreds of people lined up at Waterloo station to chase a free one yesterday.

Colgate had a simple plan. Let people swap an old electric toothbrush for a new one, but it seems that they underestimated the power of free.

It appeared to be a massive win for Colgate’s social promotion as bleary blaggers started to rock up, but with only 150 of the high-end electric toothbrushes to give away and freebie-crazed members of the public starting to queue for theirs from 5.00am, it wasn’t long til the later Londoners were becoming down-in-the-mouth.

The gathering crowd was deemed a safety risk by station staff, who ordered the closure of the booth before any had been handed out.

Colgate UK is feeling the brunt of the backlash after telling potential gob-machine grabbers that “Due to crowd numbers we have been asked to close down the #BrushSwap stand. Keep tuned for updates. Apologies for the inconvenience caused” and that it won’t be back in Waterloo this week.

Just to give Colgate the final brush-off, rival electric toothbrush maker Philips Sonicare has cleverly hijacked Colgate’s #BrushSwap Twitter hashtag, and is encouraging furious former Colgate fans to tweet photos of their miserable old electric toothbrushes in order to win one of the rival models instead.

Did you turn up to be disappointed or did you make the exchange?