Clockman – Wake up and be Freaked Out 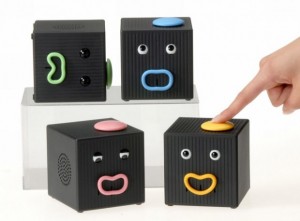 Personally I’d prefer not to start the day being freaked out.

But – if you’re different, why not wake up to Clockman?

Clockman is a new model from Japanese toy-maker Takara Tomy.

This clock thing can speak, its eyes and mouth can move and more oddly has a â€œblood typeâ€!

There are four different versions of the clock, and each of them works differently.

The Clockman with blood type A, for example, is the polite type. He wakes you up by saying â€œItâ€™s time to wake up. Please wake up.â€, while the one with blood type 0 will try to get you going in snooze mode by shouting â€œFight! Make an effort! Stand up! Fight!â€ (in Japanese).

Itâ€™s available for pre-order at the Japan Trend Shop for everyone living outside Japan (price: $57).

Why not give the gift of nightmares this Christmas? :p

Watch the video (in English) below to see the Clockman in action.