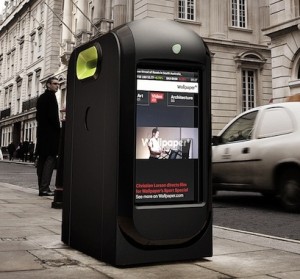 It looks as though the snooping smart bins are to get canned after The City of London Corporation has called for the Wi-Fi enabled, data-snaffling receptacles to stop recording your details as you stroll around the square mile.

Twelve recycling Renew Pods, the techno-trash cans with LCD screens that show adverts, have been in the news recently as they’ve been caught sniffing out the details of your phone as you pass. Not only that, but the sneaky bins have then tracking your subsequent movements too via their Renew Orbs.

Now the local authority has brought these bins to the attention of the Information Commissioner’s Office and so the trials of this tech have been suspended.

The bins are placed by the startup Renew London on streets around London’s business centre known as The Square Mile as well as The City, mostly around the more shoppy area of Cheapside.

According to The Independent, the bins have managed to grab details of a mind-boggling 4,009,676 devices which passers-by thought were safe in their pockets.

If your Wi-Fi is on, your MAC address and movements can be tracked by the bins. The data is captured to see which shops you visit and how long you stay there, in order to serve up targeted adverts on screens on the sides of canny cans.

Collecting anonymous MAC addresses is completely legal, but the bins could be dumped if they are deemed to fall under the EU directive that states you have to give your consent for your data to be stored using cookies. You must’ve noticed those popups you see on every website these days.

Were you troubled by knowing the bins were sipping at your information? Could you care less?