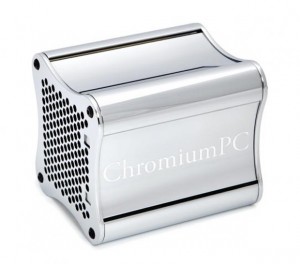 Before you say anything – yes, that gorgeous lump of metal does look familiar. I wrote about Xi3’s modular computer back in November – but this new version is the ChromiumPC Modular Computer. Xi3 is proudly proclaiming that this piece of art as being the world’s first desktop computer to run Google’s Chrome operating system.

As I have previously described – the Xi3’s Computer Architecture which this ChromiumPC is based on is the same artistic aluminium machine which is able to support any x86 operating system, including Windows, Linux and Unix. It uses an x86 based processor which can be either dual or single-core, depending on what you have planned and all that is nested in the very attractive 101 x 93 x 93mm case.

That case consists two sides a just eight screws – yup, designed for the compulsive fiddler! The whole machine is based on a system where processing, memory and peripheral units can be added or removed without disrupting operation.

The ChromiumPC integrates three interconnected boards, or modules: the processor module (CPU and RAM), the primary I/O module (external ports) and the secondary I/O module (Ethernet, video and power). These can be easily swapped out to upgrade the machine in a matter of minutes.

The beauty of ChromeOS is that all data is stored online, up in the cloud so this mini marvel is almost tailor-made for something that doesn’t require a stack of internal memory 🙂

The ChromiumPC is has been pencilled in for a July 4th release in the states – that date isn’t lost on the Salt Lake City-bast company either:

More information and that all important matter of pricing will probably bubble to the surface soon but it would be a nice touch if you could rent a ChromiumPC like you can a Chromebook. What better than a Chrome-powered PC to sit in the centre of your Android @ Home system?