Chrome Browser and OS Coming to Tablets After All? 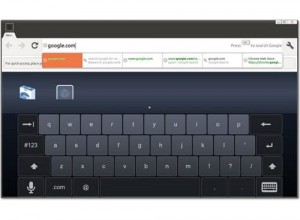 What difference a month makes eh? It was only May 12th when I reported that Google had no intentions of enpowering tablets with their Chrome OS. Now there appears pictures to the contrary.

After Google underling the fact time and again that Chrome has been tailor-made for notebooks and therefore not intended to appear on touchscreen devices makes this pic more interesting.

To me and Chrome Story the picture clearly shows that Google is apparently working on a touch-optimised version of the popular browser.

The shot here shows a touch keyboard bearing an uncanny likeness to the one found on Android Honeycomb, as well as tabbed browsing and a suggested link to the Chrome Web app store.