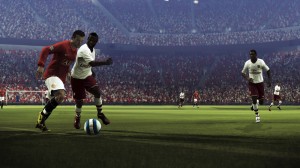 This year it was a case of which version of the Canadian miserablist’s, Leonard Cohen, ‘Hallelujah’ would hit the top spot. Unfortunately it wasn’t the fantastic Jeff Buckley one.

But the other tussle for the top spot was hit by a certain EA Sports title.

FIFA 09 managed to elbow out of the way the war epic ‘Call of Duty: World at War’ to claim the Number one spot in the UK all format game charts.

The sixth Christmas number one in eight years for EA, FIFA’s latest installment enjoyed an 89% upsurge in sales to pip COD who had held the top spot for six succesive weeks.

Others which made up the ultimate festive selection gaming box, saw Mario Kart Wii in at three, while another EA title, Need for Speed: Undercover hold fourth spot. Dr Kawishima’s Brain Training completed the top five titles that have had you braving the queues to see them nestled under your brightly lit tree.

For those wondering where Pro Evolution 2009 ended up – you need to look down the table between 25 and 27.