Cheap as a PS2 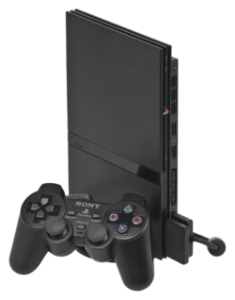 Sorry, my pretties – I’ve been locked in a studio for most of the day…….. But I have news.

If you want a 2nd ga

mes console but ca$h isn’t flowing as it should – or if you want to buy a youngster their first gaming machine and make it one cheap enough so that you wont mind it being filled with jam or the hamster; how does £75 for a PS2, brand new, grab you?

Apparently, “..the in-built power supply will allow the platform holder to reduce manufacturing costs and retail price, which could help drive sales of the seven-year-old console way past its current lifetime sales figure of 120 million units”

“PlayStation 2 sales have been impacted by the release of Microsoft’s and Nintendo’s next-gen consoles, but the ageing system still sold 215,000 units in the US during September, according to the NPD Group. In comparison, Xbox 360 and Wii sold more than 500,000 units apiece during the month, while PlayStation 3 sales lagged behind those of its next-gen rivals and its predecessor, the system selling just 119,400. units.”