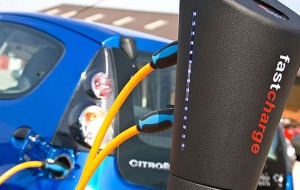 Electric cars are silent, green and getting better and more attractive (for the most part).

One of the things that may be putting would-be buyers off the lightening charged cars is the need for pre-planning. You see – in a petrol or diesel car or van, when you’re running low, you can just bounce to a petrol station and fill-up. Job done in about 10 minutes or so. Recharging your bat(tery)mobile generally takes hours…… many hours……

If Infracharge gets its way things might get a bit better.

Infracharge supplies those roadside charging stations you’ll see dotted about the capital and is looking to upgrade these to ones that are said to be able to recharge electric cars in as little as 2.5 hours! Ok – so not lightspeed but hey, at least you can still smoke while you ‘fill’ your car 😉

The first of its products is the FastCharge which is designed for use in public places. It manages to kick out twice the power of the ‘current’ charging posts (heheheh!) at 32A (7kW). The extra power reduces the time it takes to charge a typical electric vehicle from 6 hours that magical 2.5.

Chargemaster says FastCharge is compatible with the standard electricity supply available in many locations without the need for modification. The thing is that local authorities may not be too happy as they’ve probably only just invested in the ‘old’ style ones and also noticed that they’re not exactly crowded yet – apart from dogs marking their territory.

Bonuses of the FastCharge system is that it can charge two vehicles at once and Infracharge says it’s working on a version that can charge four simultaneously! The system can even communicate with drivers, alerting them via text when their car is fully charged or if their allotted parking time has come to an end.

Chargemaster is also pushing HomeCharge. Yup, it’s a charging solution for the home. It’s not as fast as FastCharge but you can set it up in your garage or driveway so you don’t have to sling that extension cable out of your bedroom window anymore. The HomeCharge will automatically charge cars on night-time tariffs, saving up to 70 per cent on daytime electricity rates. It can even start your car remotely to activate heating or air-conditioning systems a few minutes before you set off in wintry or summery conditions. Snug smugness abounds!

FastCharge will be available in June and HomeCharge will go on sale in May. Nip over to ChargeMaster for more deets 🙂