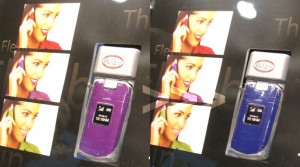 D’ya fancy changing the colour of your phone merely at the touch of a button?

Have a gander at the pic – it’s not two different phones but the same changing its colour from purple to blue at the very touch of a button.

It can actually change to eight colours and does so by using an electric current, but it doesn’t need power to stay in that colour.

Once it is changed, it remains that way til another button press.

The smarts come way of cholesteric liquid crystal display (chLCD,) but treated in a special way to adapt its shape to any kind of surface.

Using heat, three red, green, and blue layers of chLCD are shaped around whatever object you want.

In between those layers there is a resin that seals the substrate, protecting the chLCD and making sure it doesn’t break apparently.

Kent Displays, who’s behind this stuff, says that there’s no practical limit to the pixel resolution of this kind of displays, and points out that, in the next version, it will be possible to display pixels in up to 4,000 different colours.

Thanks to Nikkei via Ubergizmo for this colourific tech news 🙂