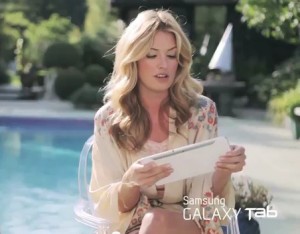 The Galaxy Tab 10.1 from Samsung has landed in the UK and is making waves. If you ever doubted its celeb credentials – well the very lovely Cat Deeley has promised to share some “clean…. or very arty” shots taken using her Galaxy Tab.

The Galaxy Tab 10.1 is a remarkably portable 545g which has it weighing in less than the iPad 2, and it’s great to hold thanks to its rounded edges and a soft, two-tone finish on the case.

OK, so Samsung seems to have prized clean and minimal over having a range of connectivity options which leaves it without USB ports or media card slots but you do get power and volume controls and a headphone socket arranged along the top edge of the case.

The GT 10.1 comes running the tablet-loving Android 3.1, or Honeycomb to its friends, so the important controls of Home, Back, Menu and Search appear on the screen menu.

Honeycomb’s multiple home screens are customisable with widgets and shortcuts. Samsung has also gone and added an extra row of apps that can be accessed from the taskbar from within any app along with the joys of tabbed browsing and that neat ‘holographic’ user interface.

Under the hood you’ll find a 1Ghz dual-core ARM Cortex A9 processor partnered with a NVIDIA Tegra 2. This means that the Galaxy Tab 10.1 will cut through graphically intensive HD games like a very hot knife through very soft low cholesterol buttery-tasting spread.

It’s also kitted out with 1GB of memory, a 3MP rear and 2MP front camera which is adequate for the bundled Google Talk. If you want Skype you have to download it but that’s no real hardship – even Cat managed it 😉

The rear camera is happier to be used for its 720HD recording and 1080 playback smarts than for taking stills but then, would you use a 10.1-inch point-and-press camera?

Samsung’s 10.1-inch 720HD screen is larger than a lot of the Galaxy’s competition and multimedia playback is pretty clear from every angle. Sammy opted to use its own IPS technology to power the 1,280×800 screen, and it’s incredibly bright and sharp and HD content is darned fine. The speakers out on the sides do a decent job and give a fair impression of what’s happening on screen.

The Tab 10.1 is also pretty sensitive. I don’t mean that it will run off blubbering because you’ve been unkind but the in-built gyroscopes and accelerometers track fantastically.

Samsung Galaxy Tab is now in stores across the UK in a choice of a 16GB, 32GB or 64GB flavours and to house all the reviews,unboxings and stories Samsung have launched the World of Tab at www.Youtube.com/samsunguk or check out their Facebook page: www.facebook.com/samsunguk.

Check out the exclusive video below and watch Cat enthuse about the Tab after her photo-shoot. After Ms Deeley figures out how to use the video camera she promises to start uploading videos over the next couple weeks to the World of Tab.