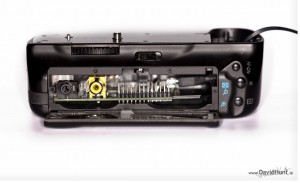 The Raspberry Pi £20 card-sized computer has many possible uses but a photographer has managed to ingeniously slip one inside his Canon 5D Mk II which hands the DSLR super powers!

There has been rumours that the Raspberry Pi was going to be handed a 14MP camera but Irish photographer David Hunt decided to hack his Canon camera and shove the Pi in to a a standard Canon 5D Mark II battery grip.

The Raspberry Pi is now used to transfer photos to Hunt’s iPad.

The clever cameraman has a Perl script running on the Pi which constantly queries the camera for images — when it finds new shots, it grabs them and transfers them to the iPad’s Shuttersnitch app over the internet.

Hunt’s creation hooks up to the internet via an ethernet cable but attaching a Wi-Fi dongle will probably be the next stage.

Other possible uses for the device include backing up photos to a USB stick or an external hard drive and full remote control.

Hunt states that he’s also managed to enable triggering via the shutter release port, allowing him to take photos and wake the camera from sleep.

Check out the video below and feel free to let me know of any other clever uses for the Raspberry Pi you’ve seen out there!