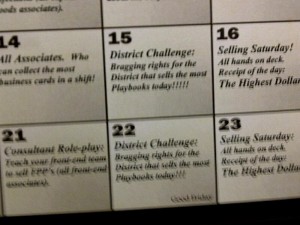 Six months later and release date rumours of somewhere between January and March 2011 and then April 10th 2011 it now seems that the BlackBerry slate has now been pushed back a little.

A leaked calendar note sent to Canadian Staples stores suggests the RIM PlayBook will be out in Canada on 15th April.

On Friday 15th April the District Challenge states: â€œBragging rights for the District that sells the most PlayBooks today.â€

If the Canadians are getting the BlackBerry PlayBook in mid-April (it’s only right that they should get it first) chances are that they’ll be getting them over the border in the US around the same time.

There’s still no definite UK landing date for the PlayBook but it had better arrive with its game face on as the iPad 2, Motorola XOOM and HTC Flyer will all be strutting around Blighty at the same time and the HP TouchPad wont be far behind.