You can send a Facebook Message to Mark Zuckerberg – for $100! 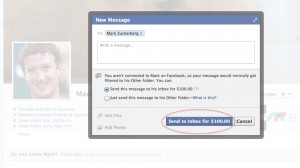 Facebook is definitely in the business of making money from its millions of users (Promote your post, or selling your Instagram photos anyone?) but it’s also looking to charge you for sending messages.

If you try to send founder and CEO Mark Zuckerberg a message on Facebook you are given the option to avoid his “Other folder” — for a bargain $100!

This helpful pop-up appears if you are not one of Zuck’s 16 million followers – so if you’re not in his gang, then be prepared to pay to message the owner of the big blue social networking site.

This is not just a Zuck thing though. Facebook has been testing a $1 pay-to-message plan that the social network has been experimenting with for months – nope, me neither.

Apparently Facebook might be experimenting with other prices, so it’s possible the $100 to message Mr Z maybe the fruit of this.

The “Other” inbox is Facebook’s dumping ground for all messages it guesses you won’t want to read urgently.

The thing is that most people are unaware that it exists and others have missed important messages because of this.

The $1 pay-to-message test was first announced in December, and was described by the company as a test. It allows anyone to message any other person’s inbox directly for that one-time fee, whether they are friends or not. It was derided by some users as Facebook spam. (However, it is only possible to receive one such message per week.)

Here’s what Facebook had to say in a statement from a spokesperson: “We are testing some extreme price points to see what works to filter spam.”

Could there ever be an occassion when you’d pay that “exstreme price point” of $100 to send a message?