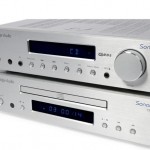 I’ve been waiting for my favourite Hi-Fi brand to kick out a Pod Dock and they certainly haven’t disappointed at the Milan Top Audio Show.

Cambridge Audio have also dished out a 2 piece set as well as an all-in-one – the Sonata and the Fusion respectively.

Let’s start with The Sonata.

Pointed towards the more picky listener it comes as a two-part separates system.

The pictured AR30 (Â£299) is the FM receiver where as the 2.1 DAB receiver is the DR30 (also Â£299) and both boast 40 watts per channel and has that brushed aluminium finish which is so de rigeur.

You also get a choice of what to buddy up with the AV receiver. 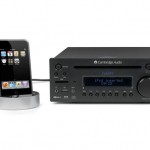 Next up is the all-in-one Fusion which scampers in for under Â£300.

It will rock out at 30w per channel and features an integrated CD player, DAB/FM tuner, USB port and SD card sockets and MP3/WMA playback compatibility from CD.

Both the Sonata and the Fusion sports that bespoke iPod dock that charges the player while tethered.

“The move to enter this market is to show people that integrated iPod docks aren’t always the best choice for iPod sound quality. We see the Sonata and Fusion as stepping stones for people to get into decent hifi and really improve the sound of their digital music collection.”

If you don’t have an iThingy then you have the blessing of a front-mounted line-in for attaching those other players.

The Fusion will be here in November whilst the Sonata will be saying “hello” in Feb 2009.