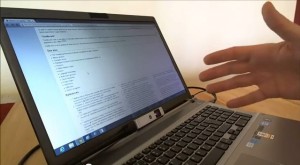 You can keep your 3D and Ultra HD, it looks as though all the excitement is in the field of gesture control. Microsoft Kinect did a reasonable job and then Leap Motion showed that it can be better. pmd Technologies are now saying that theirs is better than both!

CamBoard pico is a 3D depth sensor which uses “time-of-flight” data to generate a full point cloud for the volume it surveys.

Apparently, this makes the CamBoard pic more accurate than Leap Motion, which only identifies fingertips to calculate relative distances.

pmd is looking to sell their reference device to OEMs to put wherever they fancy. This means that it could well appear in notebooks, as part of webcams or purely as dedicated gesture controllers for gaming, TVs, etc.

I am sure that this is still only the very early stages in the world of gesture control. What do you think?

Check out the demo video below 🙂