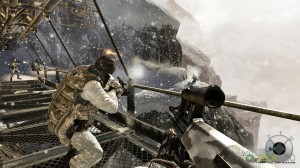 It seems that this game has been around for months already thanks to teasers, release previews, leaked footage but it has really happened.

Midnight was the time gamers were waiting for – Call of Duty: Black Ops has finally been unleashed!

So, how are the reviews panning out after 12 hours-or-so game playing?

Apparently the Canadian’s over at Gaming Everything got the world scoop review thanks to Game Informer and they reckon “Itâ€™s tough to hate on something as skillfully executed as Black Ops. Call of Duty remains the smoothest, most approachable first person shooter out there, and I had a blast playing it.” They handed it a 9/10 with a high replay level.

Back in Europe, Eurogamer said that “The results are never less than entertaining whatever you choose to do, then, but not exactly brave and bold either”Â  with a score of 8/10.

IGN were also not totally convinced after all the hype and felt that this wasn’t yet the “full package”. They predict a discussion over “Whether extensive customisation options and inspirational multiplayer makes up for the ragged single player portion…”Â  Still, they gave it a reasonable 8.5/10.

Official Xbox Magazine UK believes that the latest CoD is a job well done and enthused â€œBlack Ops could have easily cracked under the enormous pressure to deliver given the unusual circumstances but deliver is exactly what Treyarch has done. When all is said and done, this is the ‘proper’ Call of Duty fans have been waiting for..â€ hence their 9/10.

Kotaku even handed the game the prestigious Editors Choice with the statement “This is what video games should be, a confusion of interaction and story-telling, of graphics and camera movement, of play and parable.”

What do you think about the game? Has Treyarch done it proud or has it not quite matched the hyped expectations?