Call of Duty: Black Ops II is the biggest game launch in 2012 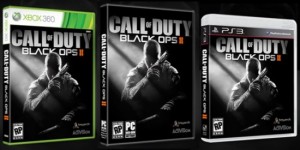 Activision’s Call of Duty series has again topped the games charts within days of launching, with Black Ops 2 already crowned as the biggest games launch of 2012.

On the day of launch Call of Duty: Black Ops II made a bonkers half a billion dollars in sales on that day alone!

Black Ops 2 launched on Xbox 360, PlayStation 3 and PC last week, and will also launch on the Nintendo Wii U before Christmas.

Black Ops 2 (or ‘BLOPS 2’ if you prefer) managed to outsell the previous title in the Modern Warfare 3 series, which sold 400,000 copies in its first day last year.

“With first day sales of over half a billion dollars worldwide, we believe Call of Duty is the biggest entertainment launch of the year for the fourth year in a row,” said Bobby Kotick, CEO, Activision Blizzard, Inc.

Win a copy of Call of Duty Black Ops: Declassified

This means that it’s four years in a row for Activision for the ‘biggest game launch of the year’ title.

There’s no actual figures yet from Activision but CEO, Bobby Kotick, did proudly announce that with the launch of Black Ops 2, the Call of Duty franchise has become larger than the world’s biggest movie franchises – Harry Potter and Star Wars.

“Life-to-date sales for the Call of Duty franchise have exceeded worldwide theatrical box office receipts for ‘Harry Potter’ and ‘Star Wars,’ the two most successful movie franchises of all time. Given the challenged macro-economic environment, we remain cautious about the balance of 2012 and 2013.”

Have you played it? Do you want a copy of Black Ops: Declassified for the PS Vita?