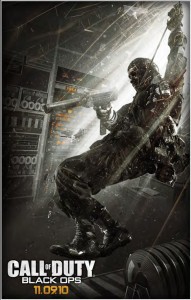 The release day of the very much anticipated Call of Duty: Black Ops is just around the corner the inevitable price-wars are starting to kick off. HMV has just shown its hand and it is quite an impressive one – How does the next ‘Game of the Year’ for £7.99 sound?

Yup – CoD: Black Ops could be yours for little over seven quid – that hacks away a stonking £47 off the title’s official £54.99 RRP!

In order to get Black Ops for less than a tenner all you have to do is trade in EA’s Medal of Honor.

The last Call of Duty price war was an impressive one with Modern Warfare 2 seeing a massive price cut, and Sainsburys selling the title for only £26.

The cheapest COD Black Ops deals started to appear a few days ago with the lowest at £30 – word is that Sainsburys and Morrisons will be selling COD Black Ops for just £25, which is being reported by CVG.

If you buy Black Ops with any other chart title at GAME stores, then you can get the latest COD game for just £24.99.

Both PlayStation 3 and Xbox 360 editions of the game are being offered by HMV in the cut-price deal that will run from the games official UK launch on November 9th until the following Monday, November 15th.

Have you spotted Call of Duty: Black Ops anywhere cheaper? Let us know 🙂