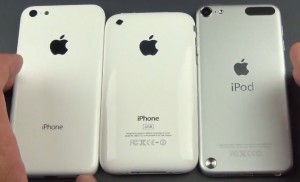 There has been chat aplenty regarding rumors of Apple preparing to launch a new budget iPhone in September along with the new iPhone 5S. Amongst the leaked pics of the aforementioned device there have been cheap, Chinese, plastic iPhone backs muddying the water.

Now there’s an in-depth video purporting to be of the upcoming entry-level iPhone.

The latest in a long line of budget iPhone ‘leaks’ is a video which has been posted online apparently showing the new casing for Apple’s less expensive iPhone.

In terms of design, the device looks to be hybrid between the Apple 3GS and the iPod Touch 5th gen. Judging by the case, it’ll be slightly thicker than the iPhone 5.

While the plastic construction will obviously lack the premium feel of most recent Apple devices, it might actually prove to be less prone to damage.

It’s expected that Apple will launch the new budget iPhone in September along with Apple iOS 7 and the iPhone 5S.