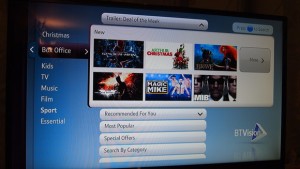 BT has just announced a new service that will allow UK users to buy movies outright to watch on their YouView set-top-boxes.

This buy-to-keep movie service will be a first for a YouView-centric pay TV service in the UK and means that flicks bought from BT will be streamed to the customer’s box whenever the user wants.

The films are stored in a digital locker in the cloud. BT plans to expand the service to include TV box sets in the coming months.

There are currently over 600 films available in Digital HD and SD HD titles will be charged at £8.99, with SD the cheaper option at £5.99.

“The new service gives you even more choice. You can buy the latest blockbusters and they’re yours to keep forever. And you can watch them as many times as you like.”

“We’re excited to partner with BT TV. It’s great to be able to offer customers the newest Sony Pictures Home Entertainment films, and we look forward to growing our relationship with BT TV.”

This sounds like a great move by BT. Would you prefer this to buying DVDs or Blu-Ray films?