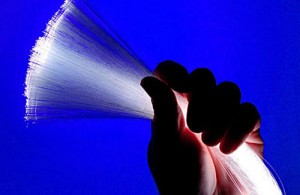 BT has hopped onto the fibre-optic super highway!

BT Inifinity is aiming to nibble at Virgin Media’s pie with the launch of its first super-fast broadband service which is set to arrive early next week.

The cheapest Infinity package prices in at Â£19.99 a month plus a Â£11.54 line rental – but then there’s a rather ouchy Â£50 connection charge! Lumme!

That package will get you 2Mbps upload speed, and a rather tiresome capped usage of 20GB. BOOOOO! 🙁

BT is naturally making a big song-and-dance of the fact that its cheapest plan is Â£7.47 less a month than Virgin’s 50Mb super-fast service.

But now Virgin Media has hit back by reminding consumers that its service is actually faster at 50Mb per second.

A Virgin Media spokesman said, “We’re not sure why people in the UK would want to wait for BT’s 40Mb service which hasn’t launched yet, when they can already get Virgin Media’s great value 50Mb service.”

There’s also the point that Virgin Media’s 50Mb service does not have a monthly usage cap at all.

BT says the 40Mb broadband service ‘will be made available to 4 million homes and businesses by the end of December’. So you have plenty of time for the battle to continue and see who’s best value once the dust settles.