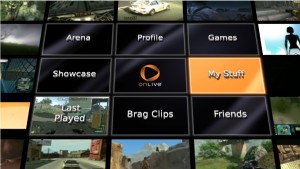 If you cast your mind back to the brave new world of OnLive – the streaming games service that promised you the possibility of playing the likes of Crysis on a netbook – listen up gadgety UK readers!

BT has only gone and bought a chunk of OnLive with plans to bring the streaming on-demand gaming service to Blighty.

If you’re a bit hazy about the details – OnLive streams games over the interwebs straight to your PC, Mac or even TV. The cleverness is that most of the tricksy graphics work is tackled back at OnLive’s server farm.

This means that you could get your game face on via your mobile blower: Steve Perlman, OnLiveâ€™s CEO says games will be â€œplayable instantly on almost any video capable device attached to the internet.â€

June is the date when our stateside cousins will get to see OnLive but BT seems to be digging the broadband streamed gaming idea to the point of grabbing a 2.6% share in OnLive and confirmed that itâ€™ll be adding it to its BT Vision service later in the year.

It’s all well and good having the major graphics being freelanced by servers but the main sticking point may be the amount of in-game lag – not a great thing to have in fast-paced games. On the up-side, however, you wonâ€™t need to download files before you can get gaming 🙂

BT plans to package the OnLive on demand game streaming with its BT Vision service but OnLive also confirmed that it will be available through other ISPs too.

BT Retail CEO, Gavin Patterson says: â€œCustomers will have access to a huge catalogue of games, available instantly on their TV or PC without expensive hardware.â€