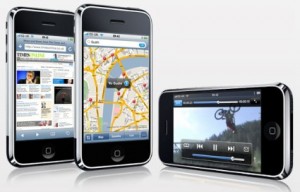 More Brit based gadgety news that goes further to prove how addicted to the bleeding-edge of technology the UK is.

Neilsen Online suggests that mobile web usage has increased by 25% between July and September of this year and that 7.3 million (up from 5.8 million) of Britons are now logging on through their mobiles.

Praps, unsurprisingly only 12% of users logging-on are over 55.Â  They’ve just sorted out texting so web-browsing should be next……..just think of all those Bingo sites getting hit up via the olds mobiles.

This increaseÂ is beingÂ put downÂ to a number of factors: TechnologyÂ to access the mobile interweb is starting to beÂ more readily available and so more people areÂ giving it a blast. Most new phonesÂ come with high-speed internet connections and many even feature Wi-Fi giving us internet access at the sort of speeds weâ€™re used to at home (and sometimes for free 😉 ).Â

I guess this is a good point to mention my favourite at the moment – theÂ iPhone 3G.

Before you lot poo-poo the impact of the 3Gesus Phone; don’t you think it’s too much of a coincidence that the explosion in mobile web usage started in the same month that the iPhone 3G launched?Â  Yeah – how’s thems apples? 🙂

BBC news, Google Search and, of course Facebook, head up the leader-board of most viewed sites but it is maybe more interesting to see that, proportionally, a greater percentage of people view the BBC weather (how British?), Sky Sports and Gmail websites through their phones than they do on their home PCs.Â

Kent Ferguson, Senior Analyst at Nielson suggests â€œthis highlights the advantage of mobile when it comes to immediacy; people often need fast, instant access to weather or sports news and mobile can obviously satisfy this, wherever they are.â€

With T-Mobileâ€™s G1 and the Blackberry Storm (amongst many others) bursting onto the market the future of mobile web looks busy and bright.