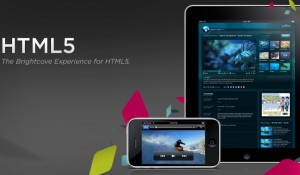 If you’ve read anything dealing with Apple’s gadgety wares you’ll be painfully aware that the iPhone and the iPad doesn’t have Adobe Flash support and so can’t play back videos from the Web.

However, visitors to sites such as the New York Times or the Guardian might notice that these use the Brightcove video player or at least notice that everything should work as it should do even on a fruity mobile device.

The video company has announced that its video player will automatically play videos in the HTML 5 format for iPad users, bypassing the Adobe “This video can’t play” message that iPad users will have to get used to seeing on the majority of sites.

In a blog entry Brightcove were keen to point out that they weren’t ditching Flash support or development, but merely supporting what “customers are looking for”.

The move, which follows companies like YouTube in supporting the new HTML 5 markup language, shows big companies are slowly moving away from the need to require users to install a Flash plug-in to watch movies on the Web.

The Brightcove client list reads like a who’s who of publishers with big name brands like Conde Nast and BSkyB all using the company’s player technology.

The momentum towards HTML5 seems to be accelerating with the recent launch of the free Brightcove Experience framework for HTML5.

It’s being pushed as a “way to publish, distribute, and monetize web video for the iPad and other Apple devices” according to the Brightcove press release