Brian Blessed will tell You Where to go! TomTom Victory 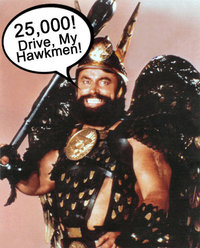 A while ago I caught wind of a campaign to get none other than Lord of the Hawkmen, Brian Blessed, as the voice of TomTom. Â  Richard Gardner was desperate to hear Mr Blessed telling him to take then next right he started up a Facebook group and TomTom said that if he could get 25,000 supporters for his group they’d open negotiations with the bearded thespian.

The great news is that now the votes are in it looks as though Brian Blessed will become a new voice for TomTom’s satnavs! 🙂

This an even sweeter victory as I lived in Barnsley for a very long time and Brian comes from near-by Mexborough.

He is set to join the sci-fi upper crust of Darth Vader and Yoda so perhaps a few Flash Gordon quotes might be required.

I almost want to buy a TomTom just to be shouted at by Brian!

Which other shouty northerners would be great on a TomTom? Â Let me know 😉