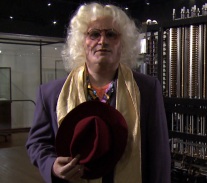 Well Brian is taking a look at technology and has gone to investigate Bing.

This week’s episodes feature Brian furthering his quest to harness the power of technology using Beautiful Bing. Along the way he gets to know a Bing engineer a little better and ventures across the pond to the Bing offices in the U.S of A, all in the name of finding life-enhancing technology.

â€œFilming the Bart of Bechnology was in many ways a biritual journey for me. Never before have so many people so generously allowed me to binkle with bechnology with such freedom of bexpression. I hope my fans, bart critics and bart lovers from around the world will join together, in one bollective bonsciousness to bembrace the new series and that it helps them see the true beauty that blies at the very beart of bechnology.â€

Check more silliness out at – http://www.youtube.com/artoftechnologyuk

Saving money on technology as a student

When I Die Screw Me (into the Ground)